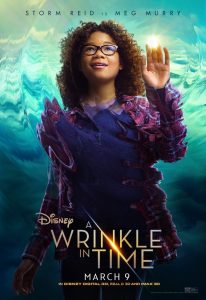 It had been years since I read Wrinkle in Time by Madeleine L’Engle. Maybe late twenties or closer to mid twenties. Hard to say.  It wasn’t my first time. I did read it as a kid. It’s the first book in a series. After re-reading it, I might eventually continue on with the books. First, I’ll have to tackle the other books on my ever growing list. Anyways, back to Wrinkle in Time. I did enjoy reading it again. I finished it pretty much in the morning and afternoon. There had been so much I had forgotten. As I was reading it, I remembered some and had forgotten some. Would I say the book was better than the movie? In some cases, yes. Both in this case. I like both in their own way.

Now to the movie. When I first heard Chris Pine was in it. I won’t lie, excitement hit. It is Chris Pine after all. Beard and all, you gotta love him.

We meet Meg, Calvin, and Charles Wallace. They go on a mission to find Meg and Charles Wallace’s father. The three go along with the three witches; Mrs. Whatsit, Mrs. Who, and Mrs. Which. Although, I don’t think in the movie they were called witches. Where in the book they are called witches. The six of them travel through a tesseract. Think of it as a wrinkle in time. The tesseract is a dimension that makes time travel go a lot easier. I won’t get too much into it, because I don’t want to spoil the book or the movie. As they look for Mr. Murry, they go on an adventure. Not the safest adventure, but it’s definitely something the three won’t forget.

I did find the ending went pretty quick. I know they can’t do every scene in the book, but I kind of wish they had shown more of Aunt Beast. I had pictured her in a certain way. I had looked forward to seeing how they visualized  her. We had a second to see her. She looked like a jellyfish in that quick second. Not how I pictured her. I always pictured her a cross between Big Foot and an octopus.

This movie though I think was done at the right time. I remember it being done in the early 2000’s. But, with today’s graphics. They did so much more. This is one of those movies were computer graphics can come in handy.

Hope to see it one more time before it leaves the theater. 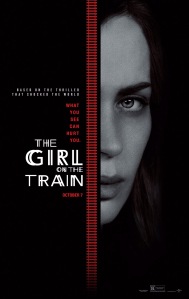 I read the book ages ago, but after it’s been out for awhile on DVD, I decided to watch The Girl on the Train. Emily Blunt stars as the main character. Well, actually no. I guess we should also count Haley Bennett and Rebecca Ferguson. Unfortunately, I don’t know any of Rebecca Ferguson’s work.

Just a quick summary. Rachel has been watching what looks like a happy couple as she passes their house while on the train. One day, she discovers something about the woman that drives her crazy. Soon, she’ll discover that same woman is missing and soon to be dead. She starts to wonder if she has a connection to this missing woman. She soon tries to figure out what she is missing from that night.

I’m really glad I read the book first. Otherwise, I would have been lost. To me, it’s one of those movies where you need to read the book first. Although, if anyone saw the movie and not the book. I would be very interested to know if you were lost or not. Maybe it’s just me? I know you can’t have every detail from the book, but you can at least put enough key points in so people won’t get lost.

The book focuses on the three women; Rachel, Anne, and Megan. With the book, it tells you ahead of time, which point of view you are in. The movie, it starts that way. But, as the movie goes along. I felt like all the characters point of views started to blend in together. I knew Rachel’s point just because of the fact Emily Blunt’s hair was brown.

I thought almost all the cast was perfect for their character. I felt like Luke Evans and Justin Theroux should have reversed their roles though. I didn’t feel like Theroux fit the role of Tom. Evans, would have done a better job. I like both actors. Many know how I feel about Evans. Love him. But, I think he would have done better for Tom. Theroux again is a good actor, but for this role? I just didn’t feel it.

Emily Blunt though did an excellent job as Rachel. Her character could have used more plot. There were things missing from the book, that would have helped explained her character more. But the emotion of her character? Blunt did so well with it. 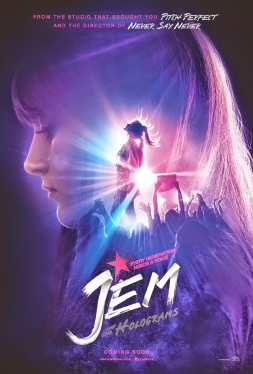 Where do I begin? Okay, I’ll admit the music was catchy. Not horrible. The plot? Could have been so much better. What am I talking about? Well ladies and gentlemen, I did it. I watched Jem and the Holograms. It’s funny to think how much my excitement changed since I first found out about the movie. When I heard there was a movie coming out, I was so excited. The kid in me could not wait. I was a huge fan of the cartoon back in the eighties. I saw article after article and was counting down the days until I could waste my money to see it in the theater. Who could I drag with me to see it?

The trailer comes out. I sit down in front of my computer and ready to share it on Facebook or Twitter. Two minutes later, I’m shocked. What did they do to my show? The movie comes to the theater. I’m not even going to waste my money on $5 night at the movies. Nope, not happening. Didn’t last long in the theater. Maybe a week or two? The DVD comes out and I’m just like, nah. I won’t.


Well, I changed my mind. I ended up putting it on my Netflix DVD list. As always, I forgot what movie I would be getting in the mail from Netflix. I just update it from time to time. Once in awhile, I’ll get a reminder to refill the queue. Anyways, back to Jem. One day, it shows up. The excitement I thought I would have, is not there. I put it next to my TV. Luckily I get two movies at a time. The sad thing is I watch everything else. Who knows how many movies I returned while that one sat by the TV.

Tonight, I did it. I watched the movie. My thoughts? Why did they even bother calling it Jem? Why? The first pet peeve is, where are the Misfits? Okay, I will tell you. They are maybe there for a cameo. But, the placement of the cameo? Not cool. There wasn’t even a reference to The Stingers.

Another thing that drove me crazy? The fact that Eric was now Erica. Maybe they did it because of Juliette Lewis. Who, I like as an actress. I might have been okay even if they had just done a female version of Eric. To make matters worse with Erica though? Rio. What the heck was that? Rio, is her son in the movie. I’m sorry if I just spoiled it for you. Speaking of Rio. Jem/Jerrica’s love story with him. Did nothing for me. There was no mystery there.

The plot was pretty much Jem being discovered on YouTube. I get it. It’s 2016. Times have changed of course since the eighties. But, you could have easily done a plot that matched the cartoon. Let’s see. We have an orphanage. There’s the music company.  Jem the original, had a scifi twist in it. There is so much right there, they could have done. They could have even thrown some action in the movie.

Synergy. Oh, Synergy. Another pet peeve right there. She was not meant to be a small robot.

There is a chance I might have liked this movie. Maybe if I never saw the cartoon or maybe a teenager. This movie was not directed towards the fans. It was more for teens I felt. Yes, I like a good inspirational movie. But, the cut scenes to YouTube videos of random people drove me crazy. Oh, and what Jerrica discovers at the end? Seriously that was the discovery?

Side note for another pet peeve. Kimber. Poor Kimber. I won’t spoil it, but if you watched the cartoon just remember how jealous she would get at times. Movie? Her character drove me crazy. I won’t even get started on how Kimber and Jerrica didn’t seem like sisters in the movie.

Some interesting facts. Samantha Newark who did the voice of Jem and Jerrica? She had a cameo. There were a couple lines in the movie that references the show. They did say, “truly outage.” Plus a couple lines were taken out of the theme song.

I hope this doesn’t stop you from seeing the movie. Please do. Let me know your thoughts. I would love to hear from other fans of Jem. I leave you with the theme song of the cartoon.