Sorry I didn’t post this until tonight. But, here are my thoughts about last night’s episode of Once Upon a Time.

I will have a non-spoiler section and a spoiler section. Don’t worry if you don’t want to be spoiled, I will give you a heads up. So let’s get started.

Overall, I thought the episode was really good. I know it’s only been two episodes of season six so far. But, so far. I’m liking it and can’t wait to see where it goes. This episode pretty much focused on Regina and the Evil Queen. We are definitely going to see Regina go through some tough times this season. Maybe some good, but I think maybe she needs to have a talk with Archie. He seems to be doing well with Emma, so far. Not much else really happened in this episode without spoiling it.

Like I mentioned above. Really, the episode focused on Regina and the Evil Queen. There were a few scenes without them. But, I don’t think what happened last night that didn’t involve Regina or the Evil Queen was a big deal. You have Belle looking for a place to stay. Emma had her therapy session with Archie.

We are introduced to Monte Cristo, who under the control of the Evil Queen tried to kill Snow and Charming. I didn’t see it coming when Regina killed Monte Cristo. But, we do need to see her struggle. It’s not like everything is rainbows and unicorns. You know she will have some issues along the way. I didn’t think it would be this quick though. I thought maybe the Evil Queen wouldn’t make herself known until at least maybe five episodes in.

I’m definitely curious to see the Evil Queen interact with Emma and even Henry. Will the Evil Queen be nice to Henry? Use him against Regina?  Emma, is the daughter of Snow and Charming. How will that turn out? Evil Queen is already trying to mess with David. I’m guessing that will cause issues with Snow, maybe Emma? I know we’ve had some daughter and father moments, but I would like to see more. I feel like we get plenty of Snow and Emma.

The Evil Queen did meet up with Gold to get the coin that she gave to David. Gold asked her not to harm Belle. But, come on! It wouldn’t be a show without the Evil Queen harming Belle. Or, do you think she’ll actually listen to Gold?

Thoughts? Did you have any dislikes for this episode? Something you loved? Let’s talk.

First off, let me get this off my chest. IT’S BACK!! Once Upon a Time is back! Can, I get a woohoo? …… Okay I’ve calmed down. Maybe. I will be doing a non-spoiler and a

spoiler section. So, if you have not seen the episode and don’t want spoilers. Don’t scroll all the way down this post. Don’t worry, I’ll have space so you shouldn’t see the spoilers.

So tonight’s episode picked up after season five. I want to say, pretty much that day. I believe. Either way, it was close. Hyde is in town and he has brought some friends. I’m curious to see where that will go and why he brought them.  This season, we’ll see Regina dealing with her new side. Emma will have some savior issues. Unfortunately, it looks like we will have some Rumple and Belle moments again. I just hope it’s not the Rumple and Belle show again.

Okay, not much else to say without spoiling it. So, after you see the episode. Please feel free to come and visit this post again, so we can chat. Please be careful in the comments in case of spoilers. If you want to comment on the show if you haven’t seen it. You can always find me on my Facebook page.

So spoilers are beginning now…

I think this is going to be a good season or has great potential. Hopefully, it can make up for the last half of last season.

Emma – I’m very curious to see what is ahead for her. I knew her being the savior would have consequences. This season, it looks like we find out what they are. I really don’t see her getting killed though like the vision showed.  Why would they kill her? I feel like the show wouldn’t be complete without her. Do you think the show could work without her? I’m sure she will see Aladdin and he’ll guide her in the right direction. I would hate to think Aladdin didn’t have a happy ending after all. After all, Aladdin is my favorite Disney cartoon.

Who was the person or thing she was fighting? I thought maybe a dark one, but that seems too easy. I’m also trying to think of a villain from another story that it could be.

I feel bad for her. You can see the walls are coming back up and that could do something to her and Hook’s happiness. Maybe even her family and friends?

Regina –  I might be the only one, but I’m looking forward to seeing how she handles not being an evil queen. Will walls build up around her? Will she hate not having her evil side? What about the Evil Queen herself? What will she do to the town? Snow better watch out. I did like that Regina and Snow had a bonding moment. Again, I might be the only one. But, I like seeing how characters grow or change. As long as the writers do it right, I think it will be cool to see this new side of Regina.

Rumple – Ha, Belle! You go girl. I’m looking forward to seeing Belle be on her own. Maybe because it would be less Rumple scenes? Yes, I know. A lot of people like him. But, he’s just never been a favorite character of mine. I say it every season. But, maybe that will change. Maybe I’ll like him by the end of season six. We shall see.

Hyde – The new villain. Not sure what to think of him yet. I do like the actor. But, I also liked the actor who played the villain last year. And we just won’t get into that role of his. Plus, I just want a good villain. No Rumple or bad villain. When I say bad, I mean where they are not convincing as a villain. Curious to know what his storyline will be for the show. Again, why did he bring those of untold stories?

Like I said, it will be a good season. I really do believe so. If I’m wrong, I’m sure I’ll admit it. A friend and I were talking about the show earlier today. I would love to see more fairy tales come into play, but how about Grimm Brother style? That would be an interesting storyline.

Just thought I would share what I got from the library. Technically, it was yesterday. Under each picture, you’ll find a link to Goodreads. As you can tell, I was in a Jane Austen mood. 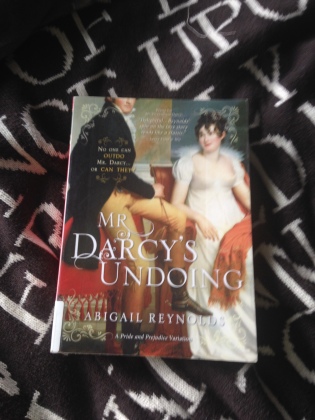